Dashni Morad is an Iraqi Kurdish-Dutch singer, songwriter, presenter, TV journalist and human rights & environmental activist. Having started life in a war torn region, things never really got easier for Dashni, often feeling as though the war was easier to endure than the discrimination she experienced as an immigrant in the Netherlands. Even still, nothing could have prepared her for the ups and downs of a controversial career in music and television in Kurdistan.

She was born on the 1st of January 1986, in the city of Sulaimaniyah in the Kurdistan Region of Iraq. The country was at war, and at the age of five, Dashni recalls a memory of a radio announcement warning of the threat of chemical warfare; something which Saddam Hussein had already used on her Grandparents’ hometown of Halabja, killing 5,000 people almost instantly. Her family couldn’t afford the gas masks recommended to keep safe from any attacks, and so her mother practiced using children’s nappies on her mouth in case it actually happened.

Shortly after this moment, rumours began to spread of a large and imminent threat to the area from Saddam. She remembers asking her parents why he hated the Kurds so much. Then as the threat materialised, in 1991, Dashni and her family were forced to flee to the mountains as refugees. Whilst some refugees fled to the Turkish border, Dashni was taken by her family to the border with Iran.

Well equipped with food and a tent, they travelled with thousands of other refugees to hide from Saddam’s threat, leaving her city, which had now become a ghost town, behind. Sadly, the harsh living conditions in the mountains took the lives of many refugees, each and every day. As Dashni reflects back now, she reminds herself how today, how much faster the world would react, as news would have spread like wildfire across Social Media – back then however, they were truly alone. She still remembers fathers burying their daughters as they passed away; too young to understand what was going on at the time.

Dashni, as children usually do, spent most of her time playing with the other children in the mud. She also remembers being given the task to run after the few aid carrying helicopters that passed by, collecting the food and medicine they dropped along the mountain.

Shortly after that, another war began – the civil war. Dashni’s father attempted to illegally cross borders and reach Europe several times, journeying from Turkey to Italy, swimming through sewers, sleeping in jail, and in the process being sent back to Greece a number of times on the way. After two years, he finally reached Holland, having been looked after by a charity in Italy. It was then that he sent for the rest of his family. The care that Dashni was shown by this charity, especially in such dark times, is one of the sparks that fuels her humanitarian work to this very day.

After moving to Holland as a refugee, Dashni found an escape in writing lyrics for songs. Her school provided her with a singing teacher, and the meanings of the lyrics gave her comfort. She used art as an escape, feeling that she could become anyone she wanted to be in those moments.

Indeed, soon enough she wanted to be like all the other Dutch girls, and share their culture with them. Growing up between two cultures, she couldn’t understand why she had to help her mother with the housework and her brother didn’t have to, and why she wasn’t allowed to play football, but he was. She began to resent her community, showing the beginnings of her feminist outlook even at a young age.

At the age of 19, Dashni found out that there was a Kurdish TV station in Germany. She insisted to her mother that she audition for her own show, and once she did, they accepted her concept straight away. Suddenly, after everything she had been through, she was given her own TV show, and an outlet for her creativity and inner flame.

In 2007, Dashni decided to finally return home to Kurdistan, and was startled at how much it had changed. Although she could no longer recognise the cities, she still felt a connection with the countryside. Soon after arriving, she began to work with a music producer, and together they kicked off her music career. Not even understanding what the lyrics meant, within two weeks they had recorded an album. The album was a mix of Kurdish folk and western pop beats.

She soon realised that the themes of the songs were considered too sexy for the local community and culture. Causing shock waves across the region, Dashni lost the majority of her fans she’d gained through her TV work. She had done what she loved, and made music, but had been used by her producer for her fame in order to make money. He convinced her to give up school and TV work so that she could concentrate on making music that would end up enraging entire communities. At one point, she was even afraid of being killed.

Pressure from that producer and a lack of career options at the time, meant that Dashni ended up releasing two more albums with him. With no established music scene and little planning, the albums were not a major success and at best received mixed reviews, in part due to their intentionally open Western themes, which Dashni thought would eventually be accepted in society.

Although she went through a period of attacks on her music and threats to her life, her resilience helped her to become an inspirational feminist figure to many young Kurdish girls who also wanted to reach their potential. 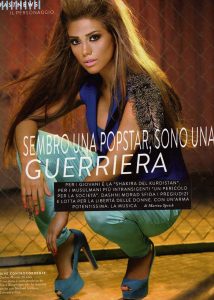 Things became even more political when, at a performance at the Asia cup, prominent public figures and politicians left their tables as an act of protest against her music and progressive dance moves. However, an international news agency picked up on the story, and released an interview with her entitled “The Shakira of Kurdistan”, which went viral in 2009. People worldwide were enamoured with the Iraqi Kurdish-Dutch girl who did not fear a conservative and religious society in the Middle East, nor the threats she received in response to her defiance. However, being boycotted left her unable to work, with very little money, and too ashamed to call home and admit defeat.

But through all of this, her feminist defiance rang true. She didn’t want to admit to the men who had worked to bring her down that they had succeeded. Despite them taking so much from her, and making her miserable – she maintains she would do it all again. Her music made the younger generation happy, and she insisted on continuing. This fact soon became the main concern amongst the Kurdish patriarchy, which began to notice the influence she had on girls in Kurdistan.

In 2012, Dashni released her first English single, “Open Your Eyes”, with producer Gary Stevenson, and writer/composer Goran Kay. It was a hit in Holland, Lebanon, Iraq and Kurdistan. She had finally left her producer, and was able to make a track charged with female empowerment.

In 2012 and 2013, Dashni began to win back the hearts of the Kurdish people, as well as respect and acknowledgement for her work. She also started a new talk, “Shepolakani Jiyan”, or the “Waves of Life”, which she produced and presented, spending an entire year researching and preparing by herself. She worked extremely hard on the show, and despite the lack of support, made it a huge success, proving that even in a male-dominated society, women can do anything if they put their mind to it.

Soon after, she established her charity Green Kids, which is a charity focussed on child access to education and in particular, environmental education. Through Green Kids, she began supporting schools by providing them with books and learning materials. Green Kids also managed to renovate a few particularly impoverished schools including their gardens and playgrounds. One of the main objectives of Green Kids was to provide equal opportunities to all kids, so they can all dream and become whatever they want to be. She also worked on a major environmental campaign, cleaning up damaging litter from the beautiful Kurdish countryside.

As the war continued to rage and spread across the Middle East in 2013, Dashni began to focus the efforts of Green Kids on refugees, and in particular refugee children. She managed to collect significant aid for the refugees based in camps in the Kurdistan Region, and then later in 2015 managed to establish the first of her Refugee Camp Mini-Libraries.

In 2013, after performing at a concert in front of 20,000 people in Beirut, Lebanon, she was offered a record deal to release her album in 24 countries. However, her management team and financiers blocked the opportunity, and she was once again the victim of a cruel plot.

Repeatedly knocked down because of her refusal to accept anything less than equal opportunity to men, Dashni was subject to yet another media smear campaign, almost destroying her image and damaging her honour. She was in hiding for a month as threats became so severe that her life was in danger, yet again. And once again, those who were closest to her drove this campaign.

Nowadays, a liberated Dashni carries the pain and agony of her past experiences as the strength to fight for what she believes in – the wellbeing of children in war and poverty, educating children about the environment and climate change, and of course gender equality, where she strives to give silenced women a voice.

In the end, as is so often the irony of life, the suffering she went through was not in vain, and in fact ended up being the catalyst she needed to develop into a true artist. In 2015, off the back of a rollercoaster ten years in Kurdistan, Dashni wrote her first English album, “A Little Light in the Dark”; an album that embodies Dashni’s spirit and strength.

This is Dashni’s story – a story of a young girl whom refused to be knocked back by the continuing oppression of a culture that belittles women, their rights, and their talents. But of course, despite the many people whom attempted to derail her career and put an end to her voice, there are also those whom have supported her throughout her journey, and to them she is eternally grateful.

Every single one of Dashni’s fans is an inspiration to her, and she wants them all to know that the Dashni story is far from over. In fact, it is just beginning.

2013 Organised many nature clean-ups through Green Kids. Managed to get…

2012 Produced and presented my own talk show, Shepolekani Jiyan. The…

2011 Released my third album, again produced by Halkawt Zahir. This…

2010 Released "Hom Shika Wawa", which was the first single release…

2010 I released my second album, "Shika Wawa", produced again by…

2009 Pleased to have been mentioned in "Der Fluch des langen…

2009 Had the honour of being recognised as Kurdistan's best TV…

2009 Had the pleasure of being the subject of a special…

2009 Participated in the Peace Concert in Iraq with the German…

2005 My career begins hosting "Be Control"; a very unique and…